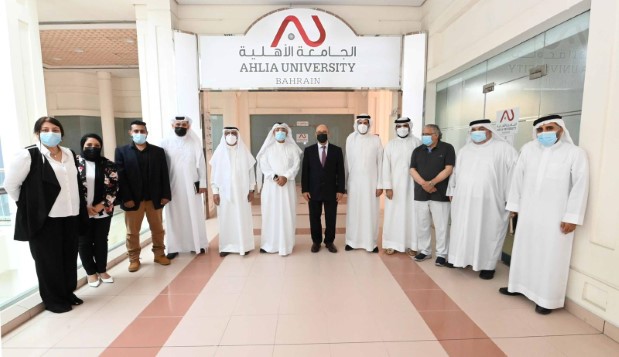 The Bahraini Journalists Association held a meeting with the administration of Ahlia University today, “Wednesday”, to discuss aspects of cooperation in the press and media field.
BJA Chairman Mr. Isa Al-Shaiji praised the great role played by Ahlia University, which represents an academic edifice and a beacon of higher education in the Kingdom of Bahrain, praising the great cooperation shown by the university with local newspapers, and the level and efficiency of university graduates in various fields, especially the field of journalism, media and the public relations.
For his part, Professor Abdullah Al-Hawaj, Chairman of the Board of Trustees of Ahlia University, congratulated the new board of directors, praising the role played by the Journalists Association in highlighting Bahraini achievements and raising the level of media workers, expressing the readiness of Ahlia University to harness all its capabilities to support the Association and its media efforts.
Professor Al-Hawaj praised the position of the Bahraini press and the efforts made by BJA led by Mr. Al-Shayiji, to highlight the civilizational achievements of Bahrain during the prosperous era of His Majesty the King.
The President of Al-Ahlia University, Dr. Mansour Al-Aali, said that the press plays a key role in supporting the higher education sector and that the Bahraini Journalists Association is an important partner of Ahlia University.
During the meeting, the BJA board members discussed with the administration of Ahlia University a number of proposals and common topics, which are aimed at raising the efficiency of members of press and media institutions, and preparing media and public relations students to engage in the labor market after graduation by empowering them with the skills and requirements of the labor market.
August 11, 2021
انشر
Share on FacebookShare on Facebook TweetShare on Twitter Share on WhatsAppShare on WhatsApp Share on LinkedInShare on LinkedIn
Latest News
Go to Top